Every week on Tuesday, Mrs. Quinny has both classes in our team go onto her dp and go under her Science News tab and read an article about what is currently happening in the science world of today's society. After we read that article, we write in our Physics Compbook our opinion on the article and why we chose it. To show her proof that we actually did read an article, we either have to email her the link or print the article out and bring it into class the next day.

I have learned that there are so many things happening in this world that I had no idea could possibly even happen. Like who would've thought that scientists at UC Riverside are making batteries with portabella mushrooms? Or how terrorist attacks influence mental health? Reading and article and writing my opinion about it every week has been something that I very much enjoy in physics. I really enjoy it because not only am I learning something scientific, I am expanding my knowledge about the science that is going on today's society. 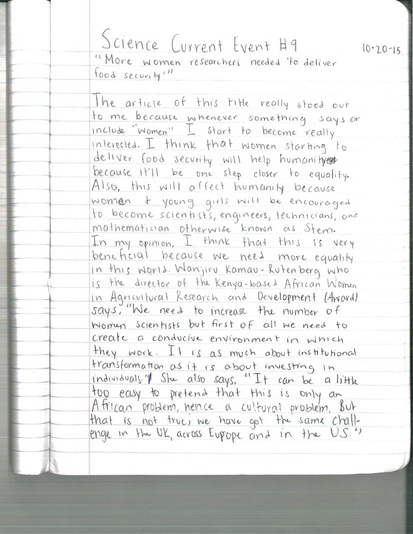 Can portabella mushrooms stop cell phone batteries from degrading over time?
Researchers at the University of California, Riverside Bourns College of Engineering think so.
They have created a new type of lithium-ion battery anode using portabella mushrooms, which are inexpensive, environmentally friendly and easy to produce. The current industry standard for rechargeable lithium-ion battery anodes is synthetic graphite, which comes with a high cost of manufacturing because it requires tedious purification and preparation processes that are also harmful to the environment.
With the anticipated increase in batteries needed for electric vehicles and electronics, a cheaper and sustainable source to replace graphite is needed. Using biomass, a biological material from living or recently living organisms, as a replacement for graphite, has drawn recent attention because of its high carbon content, low cost and environmental friendliness.
UC Riverside engineers were drawn to using mushrooms as a form of biomass because past research has established they are highly porous, meaning they have a lot of small spaces for liquid or air to pass through. That porosity is important for batteries because it creates more space for the storage and transfer of energy, a critical component to improving battery performance.
In addition, the high potassium salt concentration in mushrooms allows for increased electrolyte-active material over time by activating more pores, gradually increasing its capacity.
A conventional anode allows lithium to fully access most of the material during the first few cycles and capacity fades from electrode damage occurs from that point on. The mushroom carbon anode technology could, with optimization, replace graphite anodes. It also provides a binderless and current-collector free approach to anode fabrication.
"With battery materials like this, future cell phones may see an increase in run time after many uses, rather than a decrease, due to apparent activation of blind pores within the carbon architectures as the cell charges and discharges over time," said Brennan Campbell, a graduate student in the Materials Science and Engineering program at UC Riverside.
The research findings were outlined in a paper, "Bio-Derived, Binderless, Hierarchically Porous Carbon Anodes for Li-ion Batteries," published in the journal Scientific Reports. It was authored by Cengiz Ozkan and Mihri Ozkan, both professors in the Bourns College of Engineering, and three of their current or former graduate students: Campbell, Robert Ionescu and Zachary Favors.
Nanocarbon architectures derived from biological materials such as mushrooms can be considered a green and sustainable alternative to graphite-based anodes, said Cengiz Ozkan, a professor of mechanical engineering and materials science and engineering.
The nano-ribbon-like architectures transform upon heat treatment into an interconnected porous network architecture which is important for battery electrodes because such architectures possess a very large surface area for the storage of energy, a critical component to improving battery performance.
One of the problems with conventional carbons, such as graphite, is that they are typically prepared with chemicals such as acids and activated by bases that are not environmentally friendly, said Mihri Ozkan, a professor of electrical and computer engineering. Therefore, the UC Riverside team is focused on naturally-derived carbons, such as the skin of the caps of portabella mushrooms, for making batteries.
It is expected that nearly 900,000 tons of natural raw graphite would be needed for anode fabrication for nearly six million electric vehicle forecast to be built by 2020. This requires that the graphite be treated with harsh chemicals, including hydrofluoric and sulfuric acids, a process that creates large quantities of hazardous waste. The European Union projects this process will be unsustainable in the future.
The Ozkan's research is supported by the University of California, Riverside.
This paper involving mushrooms is published just over a year after the Ozkan's labs developed a lithium-ion battery anode based on nanosilicon via beach sand as the natural raw material. Ozkan's team is currently working on the development of pouch prototype batteries based on nanosilicon anodes.
The UCR Office of Technology Commercialization has filed patents for the inventions above.
---------------------------------------------------------------------------------------------------------------------------------------------------------------------------------------------------
I chose this article because the title has me confused like. Like how are portabella mushrooms able to make batteries? I think that using portabella mushrooms for batteries is good for humanity because the mushrooms are inexpensive, environmentally friendly, and they're easy to produce. UC Riverside engineers decided to use mushrooms because they have a lot of small spaces for liquid or air to pass through, making it have more space for the storage and transfer of energy. Those are critical components to improving battery performance. In mushrooms, they have high potassium salt concentration which allows the electrolyte-active material to gradually increase it's capacity. For me, I think this will benefit my life because since I use my phone all the time, my battery tends to decrease really fast and seeing that mushrooms will help increase battery life in run time after many uses for future phones is great.

1. Porous
adjective
Definition - (of a rock or other material) having minute spaces or holes through which liquid or air may pass.

Learning new science vocabulary is a good thing because let's say you're reading another scientific article, and you come across that word, you already know what that word means and it could help you get a better understanding of that article. Also, you are expanding your vocabulary which is always a good thing.