Have you ever wondered about the news? Do you think they are actually telling the truth? Do you have any questions about the news that you've heard of, but you don't quite understand what it's talking about? That the authorities are keeping something from you? That the truth is out there, just beyond your grasp, laughing at you? People tell you stuff all the time, and expect you to just accept it. How are you supposed to sort out  what's true from what's false?

That's what this project is all about: finding the truth in a crazy world, so you never need to take what adults tell you at face value ever again.

HOAX WEBSITE
When Dr. P told us that we had to do research on a website, I didn't think much of it since that's all we pretty much do. But after seeing that the domain was weebly, I started to doubt it. The information did seem legit but I still wasn't fully convinced. Even before I started seeing if this website was fake, I already questioned Dr. P asking him if he did this, and he denied it. So, I looked at the about page and I found an image of the author. With the image, I did a google search and I the found out that the so called author was actually a famous actor. After I did this, I started to look into the articles that were also on the about page that the author claimed he had written. There were no direct links to the articles so I had to google them myself. When I googled them and clicked on the website they were on, the articles were written by a completely different person. With both of these signs showing that this website was fake, I asked Dr. P again and he told us the truth.

"My Story So Far" Piece 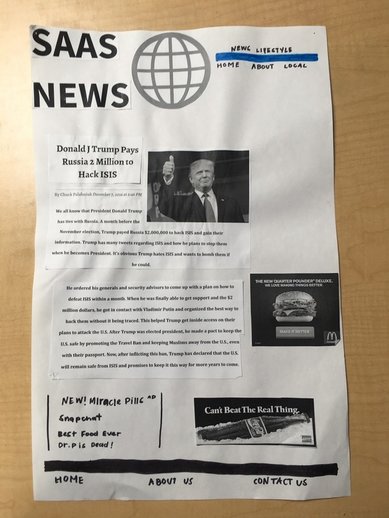 I contributed to this fake story by writing the fake article with the help of one of my group mates. I also contributed by helping another group member add ads and a website on where the article came from. Writing this short fake was difficult for me because I couldn't figure out what to write about and what kind of information to include.

I decided to write my article about a lost continent being discovered since I saw some articles on twitter. There were articles saying that a lost continent was found, so I went with that but I added my own twist to it. You'd think writing a fake news story would be easy, right? For me, it was the complete opposite. It was hard for me to add fake information that flowed well with each other. Red Flags was the term we used to describe parts of an article that made it seem unreliable/fake. My article hasn't really changed much from my first draft. The only really drastic change was when I added more information about a discovery of another continent. Also, I added a few advertisements to make the article look legit. Before exhibition, we had a run through with 8th graders from the middle school. I was paired up with two 8th graders. I honestly didn't expect them to notice most of my red flags, so I was surprised when they did. Their comments were actually pretty harsh, but I didn't mind.